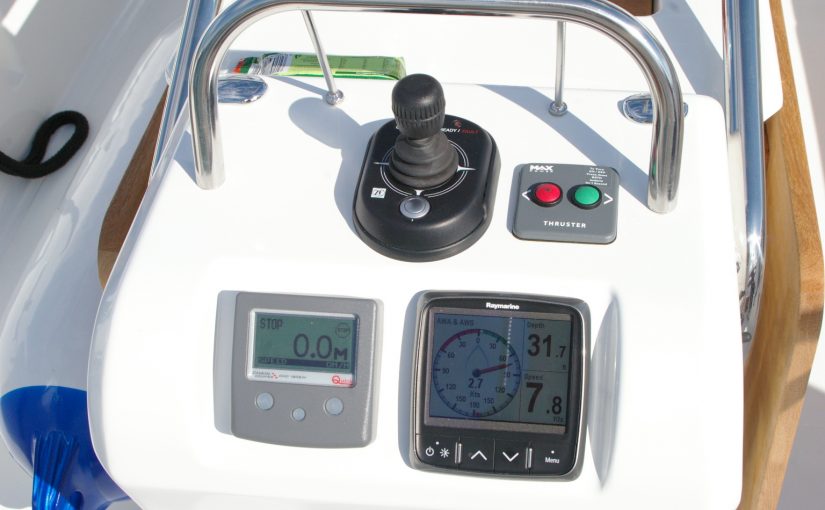 Scroll down for Problems and Fixes

I am the proud owner of a Jeanneau 49i which I launched new in August 2011. Her name is Mystique I (roman numeral for 1) and she is fitted with a ZF360 Degree Docking System. In some markets this system is called a ‘Dock and Go System’.

This is a fantastic innovation from the Beneteau and Jeanneau factory in collaboration with ZF, Yanmar, Glendinning and others. Basically the system allows a user to move the yacht in any direction, including sideways. This enables the skipper to berth his yacht in tight spaces in light to moderate current and wind direction and strength. Once the wind is above 25 knots (strong wind warning) you need to be able to draw upon traditional boat handling skills. Normally if there is a strong wind warning most of us would not go out anyway.

The system relies on integration between the Joystick, Throttle Head, Autopilot, Bow Thrusters and various parts of the diesel engine including the Throttle actuator and the Drive Leg.

In the first few years of ownership I did have a few problems with the system. I must say that ZF and Jeanneau looked after me extremely well and all issues were resolved in a very timely and professional manner.

For the past 2 years I have experienced excellent reliability and have had just one issue relating to the 12 volt power supply from the House and Start battery banks. Again with assistance from ZF and Jeanneau I have found the fault and solved the problem.

I have been sailing since 1983 and happen to also be an electronics technician. I like to fix things myself so that in the event that I am cruising in a remote location and I experience a failure I can fix it. Therefore I have equipped myself with onboard spare parts, technical information, parts lists and support contacts etc. It is also possible to purchase from ZF a diagnostic harness and software which could save a lot of time in isolating the cause of a fault in the system, especially when a serious fault in the system results in the default shutdown of the ZF system.

There are not many of these systems in Australia but I understand that worldwide there are about 400 users.

I have posted below details of any problems I have had in the past or problems that have occurred on other vessels and what has been done to fix each problem. I hope that this will assist other users who  might experience a system failure or who would like to be prepared with spare parts and resources in case of a failure.

If I can be of any assistance please contact me on +61 418 243 042. Please SMS me with your email address if I do not answer and I will get back to you.
Barry Barnes
S.V. Mystique I

Intermittent or consistent error state indicated by flashing red led on joystick when docking system is engaged. In most cases, the system disengages the drive propulsion and engine revs are reduced to idle.

Possible if you have not previously replaced your original joystick and it has a silver button as shown in the picture above. Joysticks with a black button, installed from May 2013, should not fail. The serial number of a joystick that I know to be reliable is 3329 217 148 10. If your serial number is higher than that it should not fail.

You engage the Docking System and everything seems to be working. Half way through the docking manoeuvre the bow thruster stops working but the drive leg still works. This is apparent when moving the joystick directly to starboard or port.

It is possible for the wiring connectors to fall off as a result of the vessel pounding in a sea. In my vessel one control wire connector came completely off it’s mating contact.

The two button control panel can fail, especially if exposed to moisture.

The Docking System is not engaged. The Throttle lever is in any position. Engine speed changes and drive engages or disengages without manual command or control.

The throttle head unit is normally very reliable. However, if the drain hole at the bottom of the unit is physically blocked, moisture can be trapped inside the unit and it can fail as a result.

With the Docking System engaged or disengaged, forward or reverse drive cannot be achieved by moving the Throttle Lever in the Cockpit.

The ZF Throttle Control Head engages the drive via the Throttle Control Actuator. This part is manufactured by Glendinning in the USA. In one case that I am aware of this fault was caused by a coil which became electrically disconnected from the control board that it was mounted on. This was repaired with a soldering iron by re-connecting the coil to the printed circuit board.

With the Docking System disengaged and the Throttle in forward propulsion position at cruising speed, after a few seconds or several hours the propulsion disengages and the engine revolutions reduce to idle.

When I experienced this fault condition, the cause was in the 12 Volt battery supply to the Docking System.